The Kyrgyz Republic is an agrarian-industrial country. Agriculture is the leading branch of the economy, in which about 40percent of the gross added value is created and more than half of the able-bodied population is employed. The share of agricultural land is 53.9percent of the total territory of the republic. The main branch of agriculture is crop production (growing grain, cotton, tobacco, oilseeds, horticultural and melon crops). Meat and dairy cattle breeding is developing. A promising industry is sheep breeding.

The main industries are hydropower, non-ferrous metallurgy, mining, machine building, instrument making, light and food industries. Engineering has developed mainly in the north of the republic. There is also a concentration of the largest enterprises of light industry (knitted, sewing, leather-shoe factories, Worsted-Cloth Factory). Most of the non-ferrous metallurgy enterprises are located in the south (Osh oblast). The city of Osh is also a major center of the silk and cotton industries. A large cement production has been set up in the republic. The branches of the food industry (meat, butter-cheese, sugar, butter, tobacco, etc.) almost completely work on local agricultural raw materials.

The banking sector of the republic is rising year to year with total assets accounted for USD 3, 06 billion, which equaled to 40 percent of the GDP as of June 30, 2018.  95 percent of the total banking assets belonged to the five largest banks, while overall there are 25 banks out of which 7 banks were domestically owned and 18 were banks with foreign participation in capital.

According to the National Bank of the Kyrgyz Republic, the Kyrgyz banking sector is mostly domestically oriented (more than 95 percent of the total loan exposure as of June 30, 2018). In addition, it should be noted that the dollarization of loan portfolios of banks is high, approximately 37,6 percent of total loans in the banking sector are denominated in foreign currency. 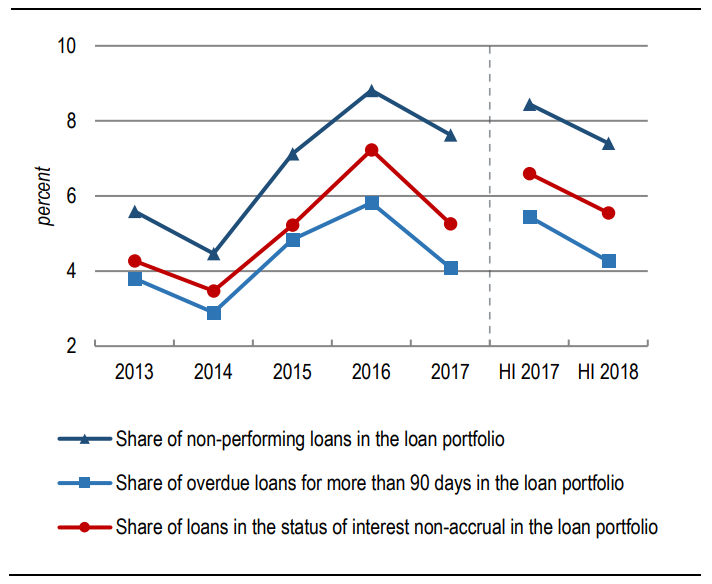 The capitalization of the Kyrgyz banking sector is adequate as evidenced by the high Core Tier 1 ratio of 21 percent and the total capital ratio of 24 percent, while the minimum requirements for these ratios are 6percent and 12percent respectively. It should be noted that the capital ratios have been on a rising trend since 2014 driven by the growth of total net capital despite the increase in the risk weighted assets and off-balance liabilities. As a result of the increasing capital ratios, the leverage ratio of the banking sector also has increased in recent years and as of June 30, 2018 leverage ratio equaled to 17 percent, which is pretty good result and is higher than the Basel III minimum leverage requirement of 3percent and the requirement of the National Bank of the Kyrgyz Republic of minimum 8 percent.

The Kyrgyz banking sector has a business model focused on commercial banking with net interest income as a principal source of earnings (more than 90 percent of total income of the sector is net interest income). The share of the net interest income is high in comparison with Kazakhstan and Russian Federation, mainly because the investment banking is not well developed in Kyrgyzstan.

The profitability of the Kyrgyz banks is moderate as evidence by the return on assets ratio of 1.3 percent and return on equity ratio of 8.3 percent at end of the first half of 2018. 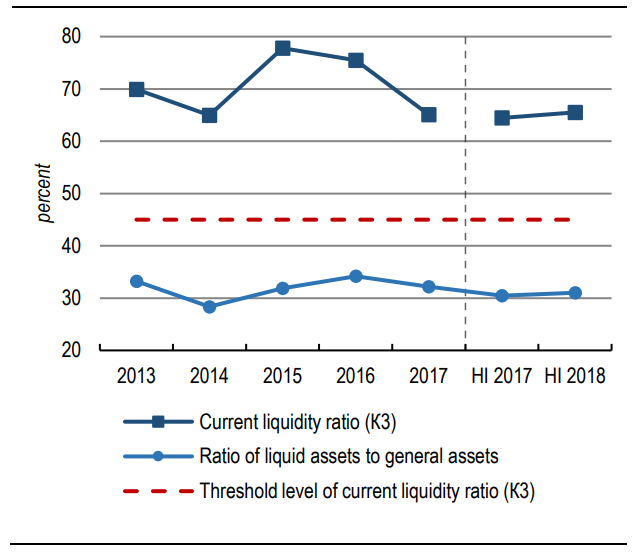